We look at timing, intel sources, the explosion and motivation

Rescue workers and security officers work at the scene of an explosion that hit the seaport of Beirut, Lebanon, Wednesday, Aug. 5, 2020. Prime Minister Hassan Diab, in a short televised speech, has appealed to all countries and friends of Lebanon to extend help to the small nation, saying: "We are witnessing a real catastrophe." (AP Photo/Hussein Malla)

The massive blast that decimated Lebanon’s major port in early August and sent shockwaves to its economy has unclear origins, for Lebanese authorities, the blast might have been externally provocative, and the circumstances of the explosion we will cover further down this article.

A warehouse stocked with ammonium nitrate for six years in the Beirut port seems like the culprit.  Ammonium nitrate storage isn’t uncommon at all, in Newcastle, Australia there’s a deposit four times larger than the one that blew up catastrophically in Beirut.

The Timing of the Event

Prior to the Beirut blasts, several other explosions took place in the Islamic Republic of Iran, the Ayatollah regime blamed Israel, and Benny Ganz, defense minister claims that Israel isn’t necessarily involved in every incident. If we look at the timeline: On June 26, an explosion at a military base in Iran, then on July 1st, a fire and explosion blew up a station at a nuclear facility, fourteen days later, seven ships are set ablaze at an Iranian port, five days later, a blast at a medical center in Tehran, and on August 4th, there was an industrial fire in Iran. 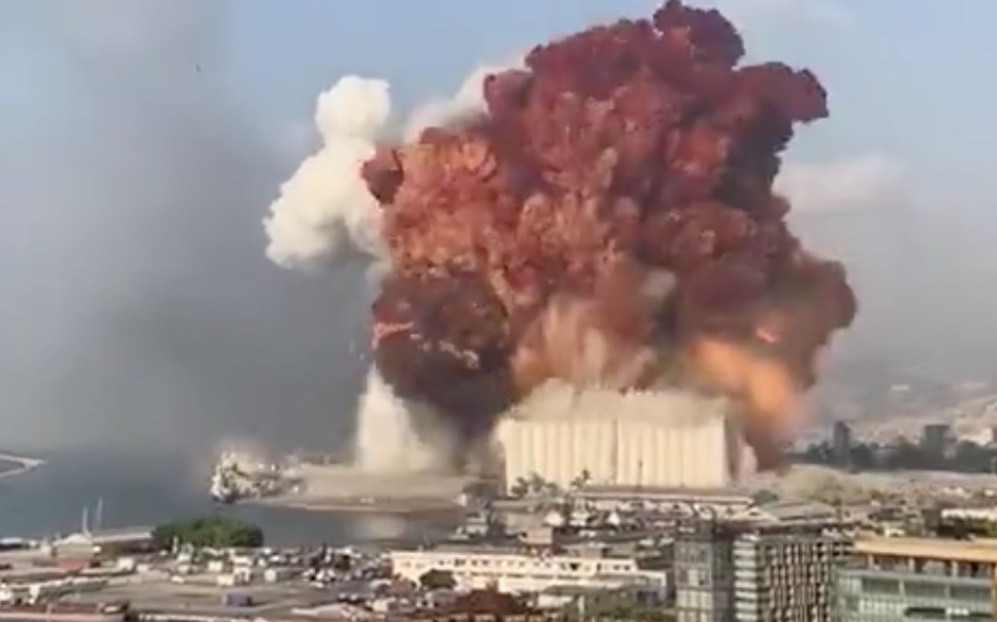 Israeli media was quick to point out that Hezbollah was behind the blast as a way to provoke Israel. The Chief of the General Staff of the Israeli Defense Forces, Lieutenant General Aviv Rochavi is caught on tape stating that in the event of a next war, Israel will forcefully strike within urban areas.

The attack also took place in the same week where International Criminal Courts would express developments on the investigation of the murder of Rafiq Hariri, former Lebanese prime minister.

US, Lebanese, Israeli, and Syrian Intelligence reports indicate several things: Movements within the port, Unusual activity, signal’s intelligence, and even Donald Trump at a press conference affirming that the Lebanese port blast was no accident, that indeed it was an attack.

The question becomes: What could account for this giant discrepancy? The forty-eight meter gargantuan monster of a crater that ate away a significant portion of Beirut’s port has a motive if we believe by structured intelligence analysis techniques.

Who benefits for such a kind of event? Let’s analyze who’s involved in this mess. The United States for the past seven months has imposed sanctions on the Lebanese government and its central banking system is in shambles. 80% of Lebanon’s currency tanked in six months. The motive for the US sanctions against Lebanon is because of Iranian proxy influence group Hezbollah’s penetration on the Land of the Cedars.

OSINT analysis of the administration of the Lebanese port indicates that Hezbollah didn’t run the port and that American military contractors knew that ammonium nitrate was in the warehouses as early as 2016. If Hezbollah ran the port, they wouldn’t have allowed US military contract inspection or would have gone about concealing arms and explosives.