Godfall is one of the most anticipated games for PlayStation 5 and PC. It is been developed by Counterplay Games that have worked very hard on it and they have revealed quite a few things about the game which kept the games discuss going even before its release. Now there more things to talk about the game which is the recent combat trailer that was revealed which gave the audience a look at how the game’s combat will look like. On top of this, there was a blog post recently on the PlayStation Blog in which one of the developers of the game talked about the combat in depth. The developers’ aim is to create such a combat experience that the player will be happy about and will praise it.

As said previously, the combat trailer had a lot of things revealed about it one of which was the ability to attack the weak points of the enemies to gain an advantage in battle. In terms of lore, Valorian knights can their power which are known as Valorplates which will reveal the location of weak spot of the enemies they are facing. This weakness will get revealed to the player when an enemy is attacking them. Those that will do this will be rewarded and the game favors those that have patience and accuracy. When the enemies’ weak points are unveiled, the player will be able to do bonus damage to them. Furthermore, some weapons have loot traits with them which will give benefits to hitting weak points

There are many types of enemies in the game and some of them are heavily armored that makes them a lot tanky. In order to do damage to them, the player will have to breach the enemy and it can be done with a heavy attack and then afterward light attacks. Heavy attacks are very effective too and once the breach bar is filled, enemies will be stunned and become vulnerable to takedowns. There is also an ability called Soulshatter which Valorian knight learns to affect their opponents’ internal Aetherium that means it takes out the very fabric of their (the enemy) spirit. Afterward, when the ability is fully charged, players can deal with damage to an enemy that can accumulate a bank with a heavy attack.

If the bank damage is bigger than the enemy’s health, players will be able to soulshatter their opponent. When this is done to the enemies there are many things that can happen to the enemies like there might be shooting elemental projectiles from the shatter or triggering secondary explosions, and many more things. Players that will be swapping between different weapons will get a bonus will in the middle of a battle. You can charge up a Polarity Attack by hitting enemies with your weapon. When this gets fully charged, a weapon swap will unleash a devastating shockwave which will boost your weapon’s damage by 20% for 30 seconds. The Shockwave’s damage will get increased when the player will level up a specific attribute. Those that want to maximize their damage to maximize completely will have to swap between weapons mid-combat. 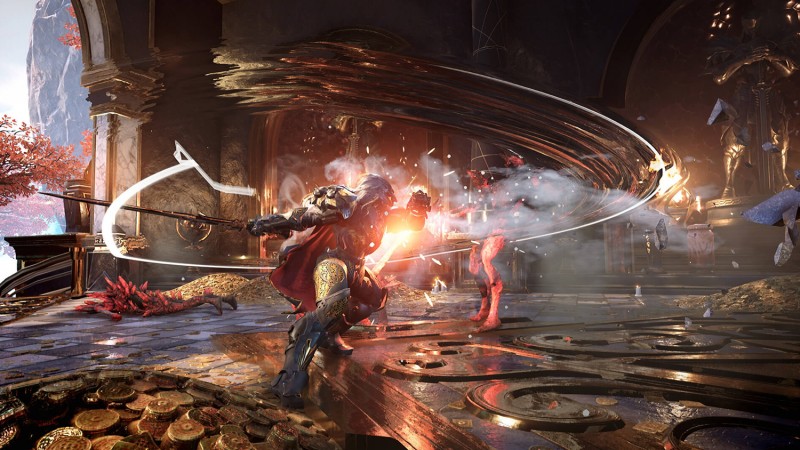 Like Weakpoints and Soulshatter, Polarity Attacks are related to looting effects. Some will increase the damage for the Shockwave, some wi increase the charge rate. There are some exotic loot traits that will inflict a debuff on enemies hit by the shockwave. Shields are very useful in battle with which the player is capable of defending themselves but it can be used as an offensive tool. Down below you can see the different uses of the shield.

Parrying as told previously is very important and will give a great advantage in battle. Upon a successful parry, that enemy will be left vulnerable for a short time which the players can use to do damage to them or will give them a brief moment to focus on other enemies.

Yes, you will be able to throw your shield at the enemy which will give you a long-range opinion. Upon landing, the enemies will get damaged and knocked down as well. But there is a short cooldown to it which means you won’t be able to spawn it.

This is a skill that can be unlocked through the skill grid, which will allow players to use a Stomach Punch with their shield to knock down enemies.

This can be unlocked just like the Stomach Punch which will stop any enemy’s Red Power Attacks that can be stopped by normal means. Furthermore, the enemies will be petrified and the petrified enemies which will turn them into obsidian that can then be broken into small pieces.

This move causes an area-based attack that can cause damage to the enemies that are within its range and just like Shield Ground Slam, this move will turn the opponents into obsidian.

This is a move that will create a large Shield Shockwave.

This is the move that will allow you to close the distances between you and the enemy. When the Shield Throw hits the enemy, the player will be able to dash quickly to their location and start doing damage to them. There is also the Archon Mode which will show what your Valorplate can really do. The developers haven’t mentioned all of these archon modes because they want the players to discover them. But they have told that at a high level the player’s archon bar will refill when they fight enemies. Once it is full players can unleash it which will give them buffs that have triggers attached to them. Trigger are those effects that will increase your power tremendously and the player will be able to do a ton of damage to the opponents.

Now let’s talk about weapons that will be in the game previously they revealed the details about the Dual Blades and Longsword. Now they are are going to talk about the last three remaining classes in the game. In the combat, trailer players can see Warhammer and Polearm, as well as Greatsword been used and down below, is everything you need to know about that.

In the battlefield, the players are always outnumbered by the enemies but to give players advantage things like the great Warhammers were made in order to take advantage of the strength given to users of Valorplate. These heavy weapons are very powerful that can dismantle opponents with brute strength and with each strikes it can destroy multiple smaller enemies. This does have slow attacks but it makes up for that with its big area-of-effect blasts which are part of its basic combos. There are other things then the normal light and heavy attacks, Warhammer will have gain charge overtime with which can be gained by attacking the enemies. When it is fully charged, there will two-weapon arts at the player’s disposal. First is a technique that will create massive energy discharging slam in an area around the player. The second one is that the player will get the option to aim and slam with which the Warhammer will send a directional shockwave that will deal bonus damage at the end of its travel.

Polearm is a term that is used for those classes of weapons that have a very long reach which is used to keep distance between the enemy and the players. This style is which mainly focuses on driving your opponent with their Insane area control instead of those weapons that are meant to receive charges. It is extremely fast and is a precision weapon with lots of thrusts attacks which is aimed deal high damage to a single target. Polearms have normal as well as heavy attacks but there is also a charge bar like all the other weapons which gives access to two weapon arts. First is a move that allows the players to jump forward quickly and perform a slam which is effects an area that will deal with moderate damage as well as staggers nearby enemies. The second weapon art is a devastating javelin throw which is a precise attack that can inflict massive damage to enemies’ weak points.

Lastly is the Greatsword which just like the Warhammers requires incredible strength in order to properly wield it. This gives players the insane striking power of a Warhammer, but with the precision of a Longsword. Some of these Greatswords are able to smash through the opponents as well as cutting them up. This also has a charge bar that fills upon hitting enemies or getting it by them but there is a chance which is that it empties as time passes by. When this bar is red, players will be able to perform a technique that will launch you the player forward in whirlwinds hitting nearby enemies. The other technique will test your aiming skills as it will allow the players to aim their Greatsword to deal damage to enemies in its path.

This is all the things that have been revealed about the combat of Godfall for now and in the future, we might get some more information about the combat. Godfall will be releasing on 12 November 2020 for PlayStation 5 and PC.