BET Hip Hop Awards 2020: Winners and All You Need To Know

All in all, let’s remember this about BET Hip Hop Awards 2020: Megan Thee Stallion and Roddy Ricch were the biggest winners out of all! On the 15th anniversary of the annual BET Hip Hop Awards, a couple of interesting things happened. First of all, those who were performing were all from varied genres, but the key ones were Lil Baby, City Girls, Burna Boy, and Chris Martin. There weren’t many awards presented during the broadcast due to a number of reasons–first of all logistics and the impact of COVID-19. The rest were all announced online. Key highlights about the ceremony will tell you a few awards were presented and they included: Best Hip Hop Video, Hip Hop Album of the Year, Hip Hop Artist of the Year. More performances included 2 Chainz and BET Awards’ famous cyphers that arranged the various performances and performers.

The biggest winners that emerged this year were Beyoncé, Megan Thee Stallion,  Drake, Roddy Ricch, Future, Pop Smoke. Legendary musician Snoop Dogg presented Master P with 2020’s “I Am Hip Hop Award.” BET Hip Hop Awards broadcast closed with a surprise performance from Senator and Democratic Vice Presidential nominee  Kamala Harris as well! She spoke about the importance of voting and encouraged everyone to vote. She also spoke about the importance of historically Black colleges and universities (HBCUs). 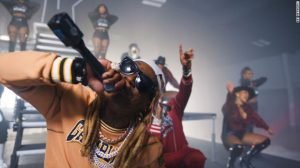 Megan Thee Stallion scored multiple wins for Hustler of the Year, Hip Hop Artist of the Year and even a shared Best Collaboration with Queen Beyoncé for their track namely “Savage (Remix ).” It earned Beyoncé the Sweet 16: Best Featured Verse award, as well. Late singer Pop Smoke, who was assassinated in February in a home breakout was posthumously crowned Best New Hip Hop Artist. Quavo paid him tribute by speaking of his achievements.

Roddy Ricch was also awarded Song of the Year and Album of the Year for his “Please Excuse Me For Being Antisocial.”

I Am Hip Hop Award

Hip Hop Artist of the Year

Song of the Year

Hip Hop Album of the Year

Roddy Ricch: Please Excuse Me for Being Antisocial

Lyricist of the Year

Video Director of the Year

DJ of the Year

Producer of the Year

Hustler of the Year

Here’s Master P accepting The 2020 ‘I Am Hip Hop’ Award from Snopp Dogg. Along with him, Monica also presented a few of the awards in the ceremony.

Other star-studded performances from the awards included: Cordae, 42 Dugg, Mulatto, Gucci Mane, Big Sean, Jhene Aiko, Ty Dolla $ign, Brandy, H.E.R., Teyana Taylor, and Erykah Badu. All in all, the whole ceremony was a huge win. Let’s hope things get better by 2021 and we see more thrilling performances, music tracks, and a bigger ceremony, at the least.